Recorder for Music Streaming and Video Streaming Including Universal Converter 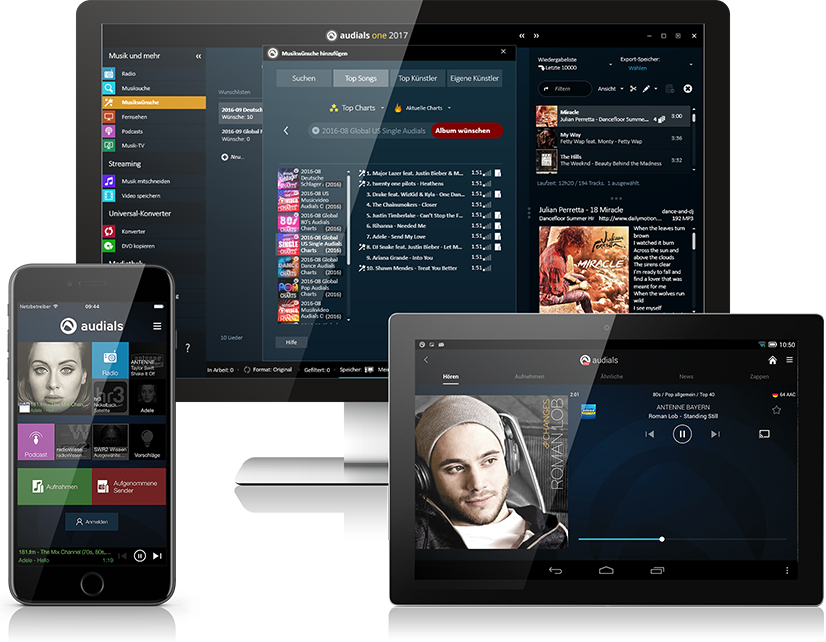 Record music and films from paid streaming services. Copy DVDs. All media always in the right file format for PC, smartphone and tablet.

Audials Tunebite Platinum also records protected streams for films and TV series from online media libraries and all video streams in top quality. The recordings are saved in any desired format for PC, smartphone or tablet with all film tags included.

No More Problems with Media Files!
85 file formats an 84 device profiles are available to you to use for copying music, videos, audiobooks, podcasts, films and DVDs and for archiving and converting them in the required format for smartphones, tablets and gaming consoles. Problems with copy protection and file formats are now a thing of the past.

Perfectly Manage and Enjoy Media!
Audials enriches your music tracks by automatically adding complete ID3 tags, album images and song lyrics. With Audials Tunebite, you can manage multiple music collections and browse through them visually in the music universe with its photos of artists. With Audials, movies and TV series are automatically named and supplemented with tags for the video title, DVD cover image, genre, year, cast, director, producers, scriptwriter, production company and country of origin. Filling up mobile devices and clouds with music is like child's play. You can comfortably enjoy all your media in the Audials player

Features Back to the top

Audials Tunebite Platinum is Your Recorder for Online Films
In Audials software, the optimal recording methods for the most popular video streaming services, video portals and media libraries come preconfigured. Simply click on the Audials tile for the desired video stream, then start the film and Audials Tunebite Platinum records it in the video format you want and optimised for any device.

Record All Videos and Films from the Internet with One Simple Click
Many popular online video libraries encrypt their video streams. The majority of tools cannot record such encrypted video streams. However, with Audials Tunebite Platinum you can record any type of video stream directly as you play it. Without any loss of quality and in its original size, Audials records both open and protected videos and films from any source and saves them as a legal private copy.

Auto-tagging for Films and Editor for Manual Changes
Recorded films and series are named automatically and supplemented with tags for the video title, film image, genre, year, cast, director, producers, scriptwriter, production company and country of origin in addition to the information about the recording source, bitrate and its containing folder. Using the editor, you can change this information manually at any time you want later on.

Audials Tunebite Platinum Records Everything You Hear Online!
Music tracks from your music streaming services are recognised as music, recorded from the stream and automatically saved with tags. Whenever you listen to a song on a website or in the player of a streaming program, Audials Tunebite Platinum can record it for you and automatically save it.

High-Speed Ripping Delivers Double the Speed for Recording Music!
Audials Tunebite can play music from Spotify at double the speed silently in the background and record it with no loss of quality. Audials Tunebite Platinum automatically records music streams with no commercials at the perfect volume, before saving your new files to your hard drive, cloud or smartphone in the best quality as MP3, WMA or AAC files with ID3 tags.

Audiobooks Lasting Hours Converted in Minutes!
With Audials Tunebite Platinum, you can convert audiobooks with or without chapters for all devices. To do this, Audials Tunebite uses audio book libraries as a virtual CD drive. Using virtual burning, Audials then saves audiobooks as MP3 files in top quality.

Only the Best Quality for Converting Audio Files
Audials Tunebite has a unique innovation so that the quality of your music and audiobooks doesn´t suffer. With PerfectAudio we give you our promise of quality with a well-developed process that only allows for top results. During recording-based conversions, for example, Audials Tunebite records the audio file multiple times and compares it with the original until the result is perfect. There are 40 audio file formats to select from.

Archive Films and Play Them on Devices Without a DVD Drive
Unprotected DVDs are copied in a jiffy. Using the legal recording function of Audials Tunebite, protected DVDs can also be copied. Owners of additional devices without DVD drives, e.g. smartphones, netbooks, ultrabooks or tablets, can convert all films from DVD for these devices using their PC. Audials Tunebite even saves the different language versions and film chapters of the DVD when doing so.

Music Universe for Browsing the Music Collection
For every artist, the Audials music universe shows you similar artists and bands using photos. This means you can comfortably and simply browse through your own music in order to search for new similar music.

Auto-tagging for Films and Editor for Manual Changes
All video files (e.g. converted movies or TV shows from online video services, online players or DVDs) can be named automatically and supplemented with tags for the video title, film image, genre, year, cast, director, producers, scriptwriter, production company and country of origin in addition to the information about the recording source, bitrate and its containing folder. Using the editor, you can change this information manually at any time you want later on.

Your Video Library - Organised Optimally!
Your movies are automatically structured according to category. Tagged movies are automatically sorted into a folder with the corresponding movie genre. This means that with each new movie added, your own personal video library is automatically expanded. You can also manually add folders for your favourite actors or directors or, if a movie has more than one part, put all the parts together in a special separate folder. Instead of seeing only a movie title or a file name, you can now browse through your video collection by movie cover image to select and play the video you want.

Mobile Devices and Clouds Filled with Media
Audials Tunebite fills up your smartphone or tablet either directly via USB cable or via the Internet from the cloud.

Audials Tunebite Platinum Turns Your PC into a Personal Media Cloud
Access the music, videos and films on all your computers when you’re on the move with your Android smartphone. Simply leave your PC running and with Audials Anywhere you can access, browse, play and download your media at any time and in any location.

What's new in Audials 2019? Back to the top
The new Audials Tunebite 2019 Platinum has a completely newly designed player for Internet TV. It provides you with smooth, high-quality television, especially when you're watching in full-screen mode, even on slower PCs.
This means you can continue watching TV on your PC at home, but also on holiday with your notebook, and you won't miss a single episode of your favorite series. 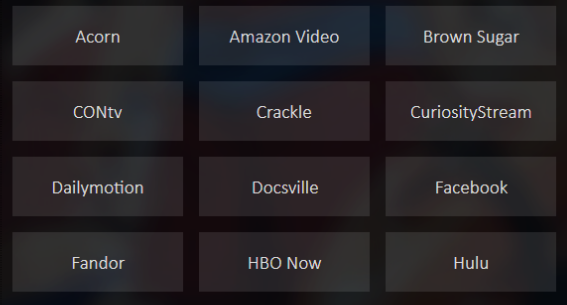